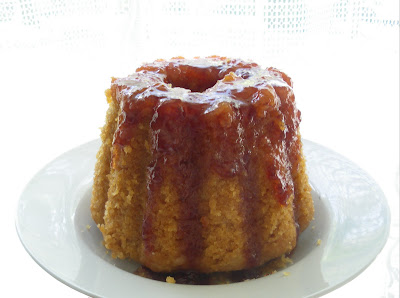 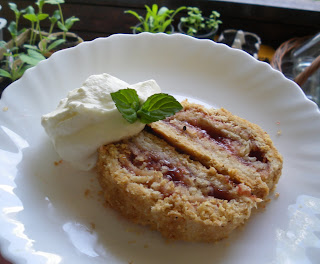 I loved, loved, and loved this challenge. Since I used to make my own lard, making my own Suet was no big problem. I had a harder time getting it.

Still after having to wait 2 weeks for my Butcher to have what I so much needed it was super easy to have the first part of my suet puddings finished.

Knowing that it would hold better up to the transport I made a baked Jam Roly Poly. At first I wanted to make a steamed one but knowing my children and the love they have for crust I just knew that this was the way to go.

The Roly Poly was filled with the last strawberry jam from last year and sprinkled with brown sugar. Served with a little fresh whipped cream it was a nice dessert.

Next time I will steam the Roly Poly because I think that this will help the flavours, not the forget that the baked one was on the dry side. 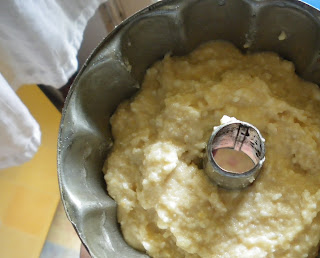 Next I made the Marmalade Pudding, again using the homemade jam. This was so delicious I not even wanted to share.  Using my Grandmothers pudding form and the potato steamer for this task made it so easy and uncomplicated that I from now on will do it a lot. 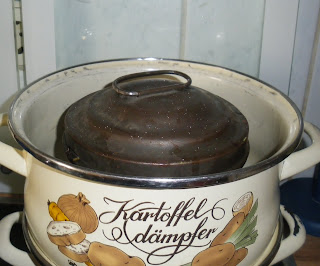 There is much to explore, to taste and try. Go over to the Daring Bakers and take a look.

Or just grab the recipes here. 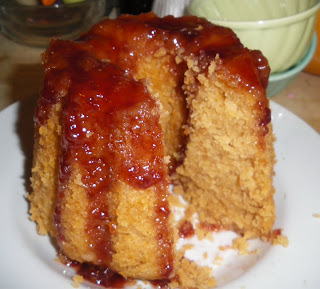 Not that the roly poly doesn't look good (because it absolutely does - the addition of brown sugar was genious!) but that marmalade pudding is begging me to take a taste! Beautiful puddings!

That marmalade pudding does look fantastic and I wouldn't have shared either!

I love the pudding form that you used! I want to try a roly poly next - this whole challenge was so new to me, I didn't have time to try everything! Great job on the challenge.

Just love your puddings and it sounds like you really enjoyed this challenge so much. Love your photographs. Cheers from Audax in Sydney Australia.

Theform from your grandmother is amazing - I wish I had such a sense of history in my family but everything gets thrown away because we've moved so often...Lovely pud!

I dont even like marmalade but still your pudding makes me want to take a bite!

beautiful pudding. The shape is perfect...

I'm impressed you got suet at the butcher's. I didn't even try it and ordered boxed suet online. The pudding form looks great, almost like a Bundt pan.

The form and steamer are lovely! So are your puds! Yum!

What a beautifully shaped pud! Both look absolutely delicious. And I am soooo impressed that you make your own lard!

Those both look delicious to me!

I love the pudding molds you used, too, so cute!

P.S I am going to have steal that pudding mould.. how cool is that!

I love the shape of your pudding form, and that potato steamer is classic! I wish I could try your strawberry jam roly poly, it sounds delicious.

Beautiful! And I love the vintage equipment!

I like the look of your marmalade pudding, it looks so homey:)

Wow they both look delicious...and home made pudding looks so good!

Beautiful mold and pudding! The jam roly poly sounds so good too.:)

I love your version! It looks so pretty sliced and plated. Strawberry jam with brown sugar - sounds wonderful!

Hi Wic! I just love all of your kitchen-ware, the pudding form and potato steamer. Your pudding is so lovely. It looks like it rose really well. I'm so happy you like this challenge.

Jam roly poly! Cor, that looks good. I've always baked it as well, but now that you mention it, steaming probably would be better. I might try that out.

I love the idea of a marmalade sponge too. It looks beautiful with the marmalade running down each ridge. Mmm!

This looks great! So warm and jammy, yum!

What a great idea with the jam roly poly! Thanks for the helpful information--both looked really delicious! :)

Marmalade pudding looks so wonderful and tempting. A home made marmalade is definitely a plus. Great job on this challenge!

My, what a tall pudding! Really impressive. I can understand your unwillingness to share it!

Wow, you went the extra mile doing two puddings, and homemade marmalade too! They both look wonderful, but I love the name Roly Poly:)

Did you say homemade marmalade...LOVE that stuff. Reminds me of my grandmother. it must be indeed an amazing combo with a stem pudding. Fabulous!

the rolly polly is great, so creative and it looks delicious!

The jam roly poly looks good, but I'd pick your marmalade pudding over it. LOve marmalade. :)

Everything homemade and looks so delicious! Great job on this month's challenge!!!
Cheers. Anula

Mmmm wow these both look so good, I love the look of the Jam Roly Poly, it looks delicious :D.