Romancing in the Kitchen: Ten years Good Eats or how to Brine Turkey Alton Style 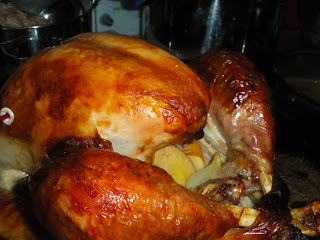 It was 6 years ago. I saw the best and craziest cooking show and I fell in love. Good Eats is not just a cooking show it’s Entertainment, with a pinch of History and a Tablespoon of Science. Host Alton Brown is a man that learned early that if you want really good food, you have to make it yourself.

In this show you learn and you laugh what better cooking show can there be?

There are episodes I love and some I adore. I love it when he bakes with his Grandmother "Ma" Mae Skelton ( The Dough Also Rises) because I myself had a special relationship with my Oma. All the episodes with Brown's nephew and his sister are worth watching a few times.
Not to forget his bad twin B.A.

Alton was the one that told me about brining. He showed me what Americans do to make turkey delicious. And today I tried it myself.

I learned from my grandmother how to make turkey. With a lot of bacon and chestnuts. Good Eats but maybe  a little Alton Science can make it even better.

So lets congratulate Alton and his Crew and Romance The Bird!

Begin thawing the turkey in the refrigerator or in a cooler kept at 38 degrees F.

Combine the vegetable stock, salt, brown sugar, peppercorns, allspice berries, and candied ginger in a large stockpot over medium-high heat. Stir occasionally to dissolve solids and bring to a boil. Then remove the brine from the heat, cool to room temperature, and refrigerate.

Early on the day or the night before you'd like to eat:

Combine the brine, water and ice in the 5-gallon bucket. Place the thawed turkey (with innards removed) breast side down in brine. If necessary, weigh down the bird to ensure it is fully immersed ( I used a Brig packed into a Ziploc bag), cover, and refrigerate or set in cool area for 8 to 16 hours, turning the bird once half way through brining.

Preheat the oven to 500 degrees F. Remove the bird from brine and rinse inside and out with cold water. Discard the brine.

Place the bird on roasting rack inside a half sheet pan and pat dry with paper towels.

Combine the apple, onion, cinnamon stick, and 1 cup of water in a microwave safe dish and microwave on high for 5 minutes. Add steeped aromatics to the turkey's cavity along with the rosemary and sage. Tuck the wings underneath the bird and coat the skin liberally with canola oil. 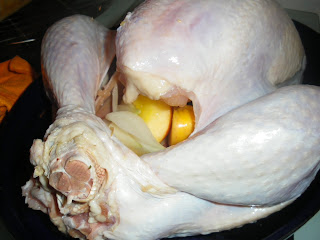 Roast the turkey on lowest level of the oven at 500 degrees F for 30 minutes. 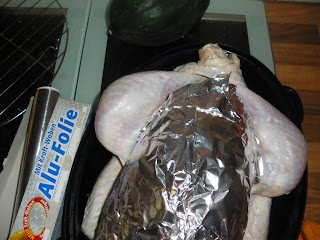 In this Episode Alton tells us to make a little foil breast armour and that’s what I did as you can see on this Picture. It was formed before the Turkey came into the oven and I put it after the first 30 minutes onto the Breast.

Insert a probe thermometer into thickest part of the breast and reduce the oven temperature to 350 degrees F. Set the thermometer alarm (if available) to 161 degrees F. A 14 to 16 pound bird should require a total of 2 to 2 1/2 hours of roasting. Let the turkey rest, loosely covered with foil or a large mixing bowl for 15 minutes before carving. 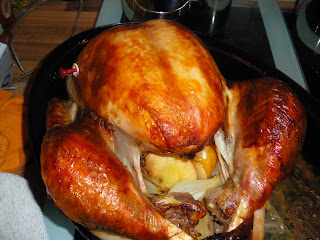 I served the Bird with Semmelknödel (bread dumpling) I will post the recipe soon.

This Turkey was divine. Believe me I am not just saying this so you think Alton is the Genius I think he is. I will from this point on brine the birds.

If you not already doing it, try and tell me about it.
Have a great time and a little good eats.

I love Alton Brown!! :D I use a lot of his recipes! I have a chicken in the freezer that is suddenly begging me to be brined and roasted...